As a nominee for Best Actress at the Academy Awards next week, Margot Robbie has been a fixture of the Hollywood awards circuit.

But the I, Tonya star is a chameleon in both the beauty and movie world – unafraid to experiment with bold lipsticks and metallic eyeshadow.

So FEMAIL has compiled some of Margot’s best beauty looks throughout the years, and reveals the products – some her own favourites – that you can use to recreate them. 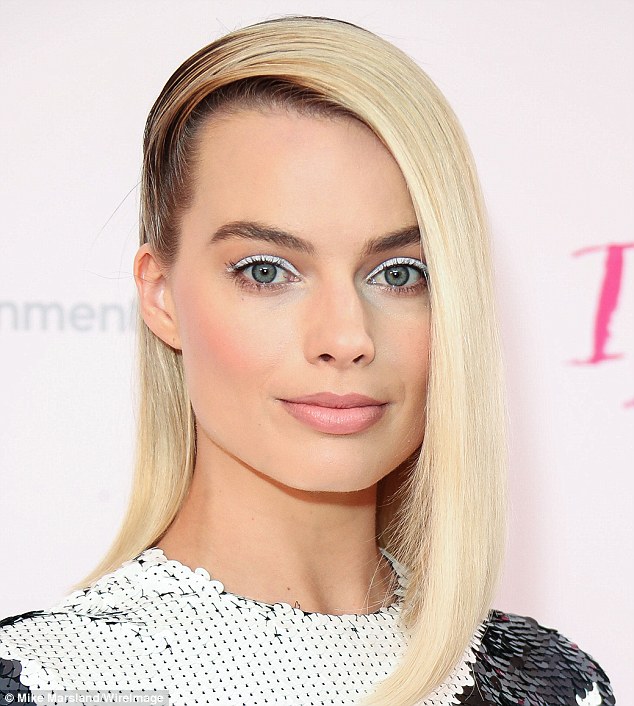 FEMAIL has compiled some of Margot Robbie’s best red carpet looks, including this one from the I, Tonya UK Premiere last week

At the I, Tonya UK premiere last week, Margot drew inspiration from the stars – literally.

The 27-year-old made her silver eyeshadow the standout of her beauty look, causing her teal eyes to look brighter than ever.

Her high-impact shimmer can be replicated with MAC Cosmetics $39 Pigment in silver fog, which becomes even more dramatic when applied with a wet brush.

To keep the focus on her lids, Margot made sure everything else about her look stayed simple and fresh. 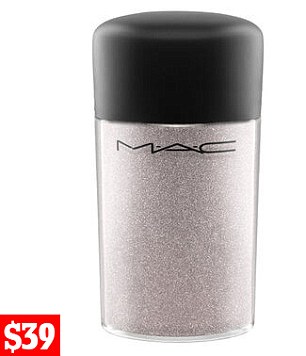 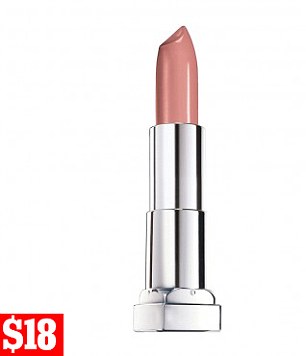 She kept the mascara to a minimum, ditched the eyeliner, and sported a nude lip.

A similar shade of the latter can be found with Maybelline‘s $18 Colour Sensational Matte Nude Lipstick. Go for Beige Babe if you want to copy Margot’s exact shade.

The Aussie beauty also wore her hair in the sleek ‘wet’ look that has become trendy in the last year and added to her futuristic vibe.

Experts recommend using a wax or gel to create the ‘wet’ look – like Ouai‘s $36 Matte Pomade – instead of water, which will eventually dry and ruin the style. 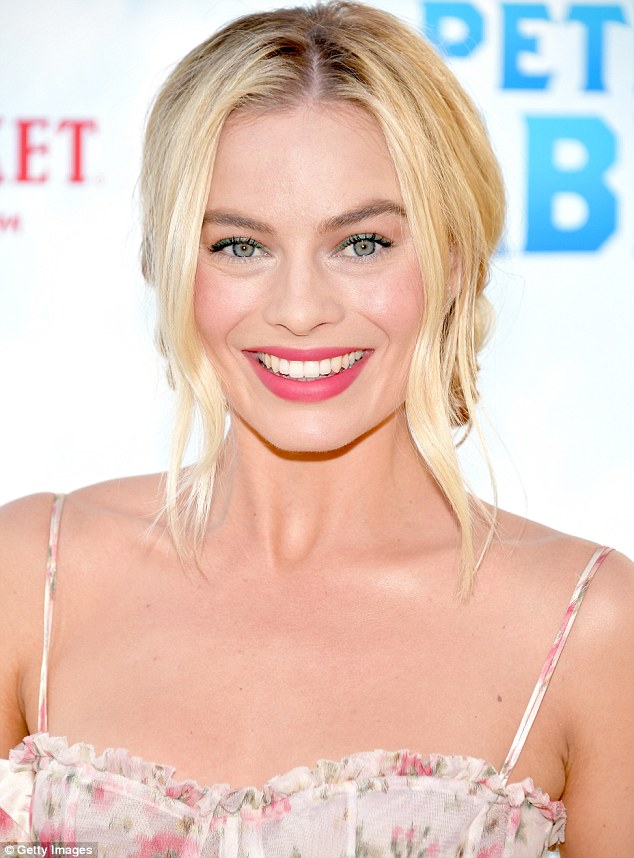 Margot went for a completely different style at the Peter Rabbit premiere in Los Angeles earlier this month, opting to sport florals for the release of the children’s film

Margot’s recent red carpet look was a complete 180 from the florals she sported at the Peter Rabbit premiere in Los Angeles earlier this month.

The actress kept her style fun and fresh for her new children’s film, sporting a happy rosy glow on her cheeks.

Margot has long said NARS is her favourite blush, so take a page from her book and go for the brand’s $44 highlighter in Free Soul – a light, shimmering pink. 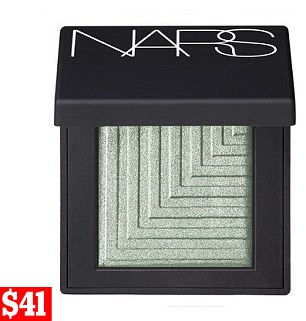 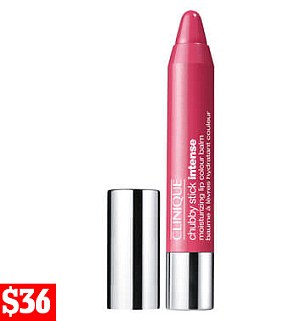 She matched the subtle green stems of the flowers in her dress with a bright but subtle shadow that can also be found with NARS‘ $41 Dual-Intensity Eyeshadow in Icy Mint.

While the actress is hardly afraid of a bold lip, Margot has admitted in past interviews that that she prefers easy breezy lip balms instead.

And her bold rosy pout on the red carpet can be replicated with Clinique‘s $36 Chubby Stick Moisturising Lip Colour Balm in Intense Punch. 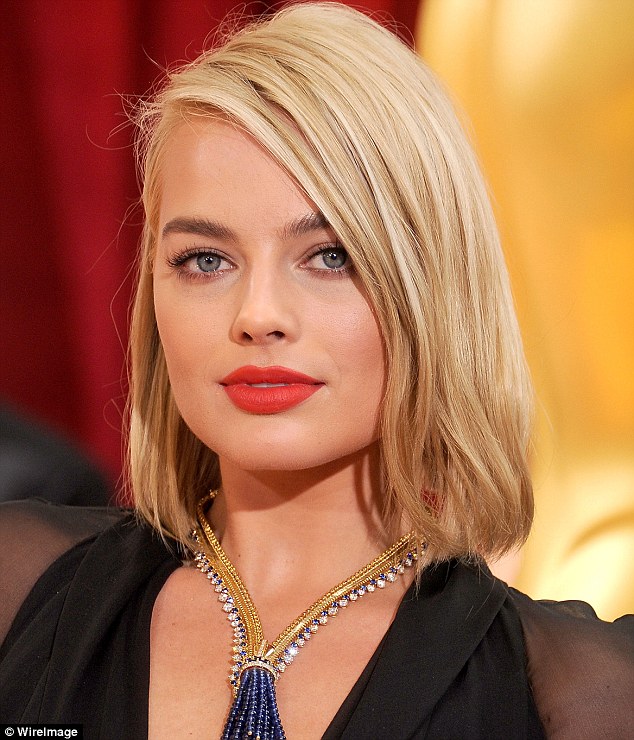 The actress brought a bright fresh coral lip to the 87th Annual Academy Awards in 2015, just as she was earning rave reviews for her part in the film Focus

Before she was an Academy Award nominee, Margot was still making a splash on the red carpet during Hollywood’s biggest night of the year.

The actress wore a fresh coral lip to the 87th Annual Academy Awards in 2015, just as she was earning rave reviews for her part in the film Focus.

On a night watched by millions around the globe, Margot opted for the bold standout lip in a matte finish that can similarly be found in L’Oreal Paris‘ $8.40 Infallible Matte FX Lip Colour in Disturbia. 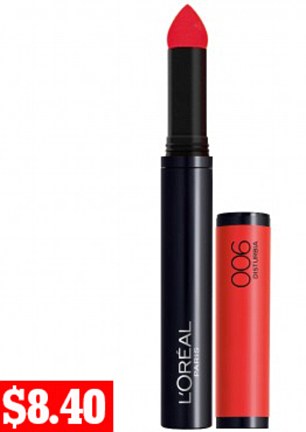 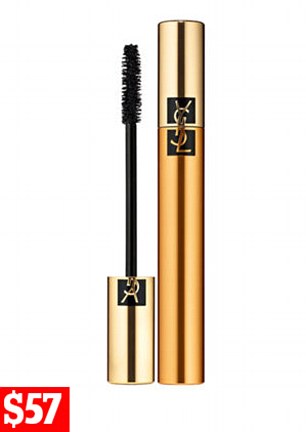 Her bold coral lip can be replicated on a budget with L’Oreal Paris’ $8.40 Infallible Matte FX Lip Colour in Disturbia. And get Margot’s dramatic lashes with Yves Saint Laurent’s $57 mascara

Margot also brought the drama with sky high lashes, which may have been brushed with one of her favourites – Yves Saint Laurent‘s $57 Mascara Volume Effet Faux Cils.

The starlet’s warm all-over glow and even skin tone can likewise be replicated by another one of her go-to products, Ellie Faas $106 Skin Veil Foundation.

Margot still opts for dramatic looks when it comes to award ceremonies, most recently at the Producers Guild Awards in Beverly Hills last month. 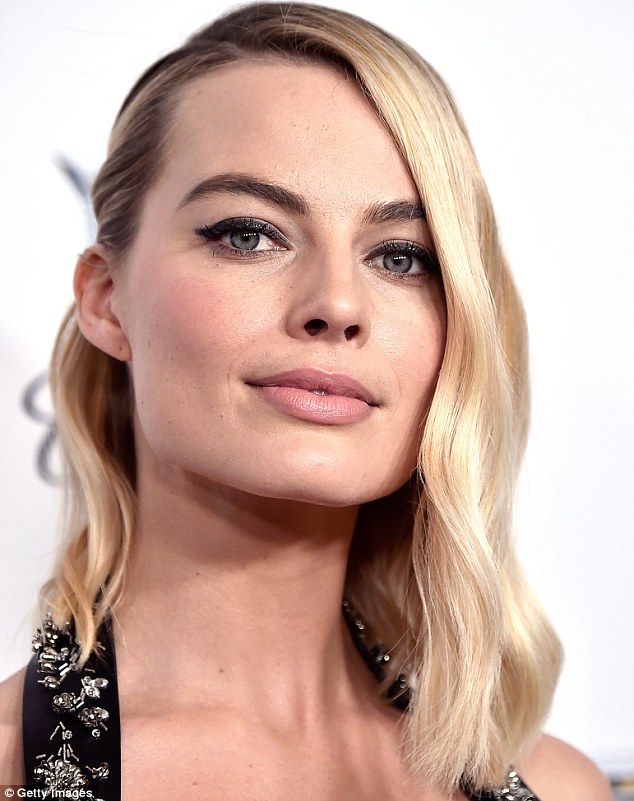 Margot still opts for dramatic looks when it comes to award ceremonies, most recently at the Producers Guild Awards in Beverly Hills last month

While Margot tends to prefer more natural looks, on this night she lined her lids with black liquid eyeliner and filled in her brows to give them a darker shade.

Those who want to channel Margot’s smokey eye will find a high pigment liquid eyeliner with Kat Von D‘s $28 Tattoo Liner, and can outline and fill their brows with Anastasia‘s $45 brow definer.

To keep the focus on her eyes, Margot sported a nude lip and kept her hair sleek in a style that oozed Old Hollywood glamour. 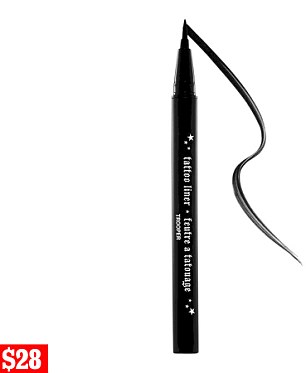 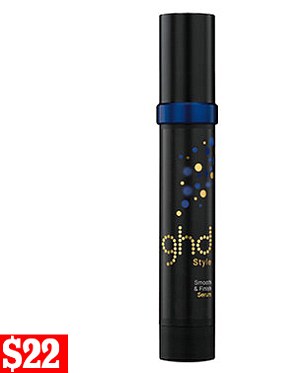 A finishing serum is the perfect way to mimic her shiny locks, and can be found in the likes of GHD‘s $22 Smooth & Finish serum.

Margot had a similarly dramatic look at the world premiere of Suicide Squad, one of the films that helped cement her name as a star to watch.

Although the actress tends to stay away from red lips, on this night she went with a dramatic scarlet. 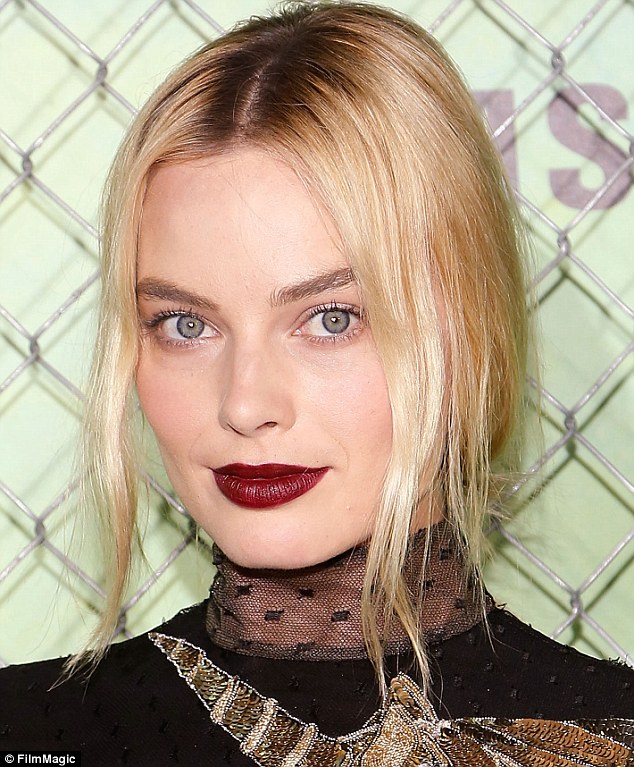 Margot had a similarly dramatic look at the 2016 world premiere of Suicide Squad, one of the films that helped cement her name as a star to watch

The gorgeous colour, easily the standout of her look, can similarly be found in Kat Von D‘s $29 Studded Kiss Creme Lipstick in Mercy (Metallic Garnet Berry).

Margot kept her eyes uncharacteristically bare, eschewing eyeliner and mascara and instead swiping her lips with a soft gold shimmer.

Chantecaille offers a similarly subtle shade with its $49 Mermaid Eye Colour in the colour Copper.

To keep the spotlight on her bold lip, Margot pulled her hair out of her face in an easy up-do.

But the actress still kept things interesting by leaving two locks to frame her face, giving them a textured wave that can be replicated with Schwarzkopf $7 Extra Care Body & Texture Texturising Spray. 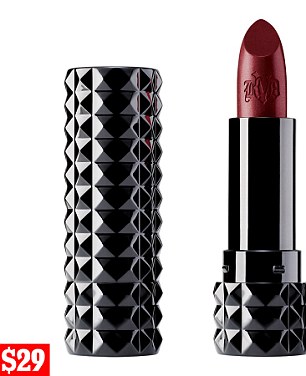 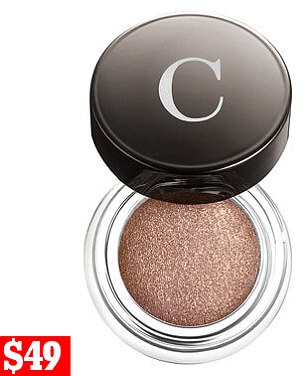 Her gorgeous bold lip can be copied with Kat Von D’s $29 Studded Kiss Creme Lipstick. And that subtle shimmer is found in Chantecaille ‘s $49 Mermaid Eye Colour in Copper