Annabel Davis has been a professional model for only a year but has already amassed an impressively varied portfolio.

One minute she’s sashaying down the catwalk in a designer fashion show, the next she’s taking part in a photoshoot for a commercial or even appearing as an extra in a Hollywood film. ‘The phone hasn’t stopped ringing,’ she laughs.

It’s easy to see why. Standing at a statuesque 5ft 8in with a slim but curvaceous size ten figure, she has long tanned limbs, razor sharp cheekbones and ice-blue eyes. But Annabel also has silver grey hair and plenty of laughter lines. 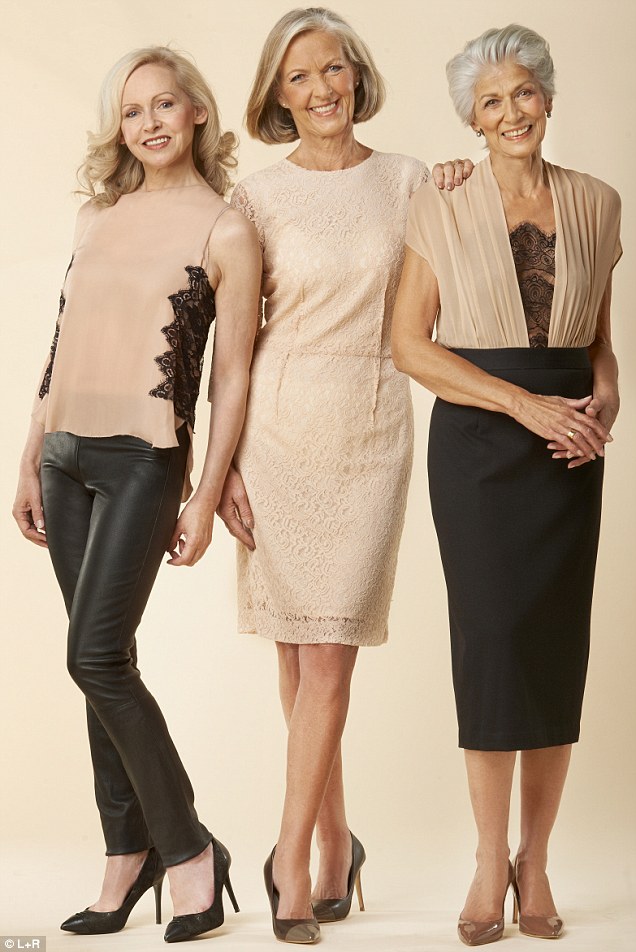 Annabel is 61. Yet at a time when many women are contemplating the end of their career, she has found herself a new and rather unexpected one on the modelling circuit.

Nor is she alone:  in recent years a number of other women of a certain vintage have been making a living in front of the photographer’s lens, their popularity fuelled by a notable upsurge in the presence of older women in advertising campaigns.

Even high-end designers — usually known for using models barely out of adolescence — have decided that older women have a unique commercial presence. At New York Fashion Week last week, one of the world’s oldest models, 81-year-old Carmen Dell’Orefice, took to the catwalk twice in one day — a feat usually only achieved by the hippest young things.

And Lanvin unveiled 82-year-old grandmother Jacquie Tajah Murdock as the face of one of its autumn campaigns after plucking her from the streets of her native Harlem. Dolce and Gabbana too have chosen 82-year-old Daphne Selfe for a lavish advertising campaign. Over at Bulgari, it’s a more spritely 60-year-old Isabella Rossellini.

But it’s not only high fashion. On the High Street, Marks & Spencer was one of the first out of the starting blocks when, in 2005, they hired Twiggy, 63 next week, to take part in their promotional campaigns.

Agencies have started to realise that older models can have just as much commercial clout as women decades their junior — a trend Annabel, from London, knew nothing about when she spotted an advert for mature models last year and applied on a whim.

A former police officer whose ‘patch’ took in Heathrow Airport, Annabel had retired and thought there was little likelihood of being taken seriously.

She says: ‘It was a case of thinking “well this could be fun”. But I was signed up immediately and the agency told me not under any circumstances to change the colour of my hair. They said there was a real market for models with silver or white hair.’

At her first shoot for prestigious photographic agency Getty, the director said she should view her hair as a prized asset. ‘He told me that when you’re a model in your teens or 20s, there’s a huge pool of talent out there. But with every decade, that pool becomes smaller and smaller and older models are like gold dust,’ she says. 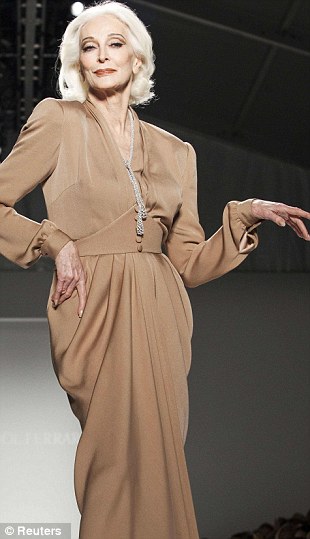 ‘I’ve been incredibly touched by the positive reaction I’ve got from audiences at fashion shows. People have said I’m inspirational. And younger models look at me and think: “Wow, maybe I do have a career once I’m past 30 after all.”

‘As far as I’m concerned, all this stuff you read about hitting 60 and suddenly becoming invisible is nonsense. It’s not even about looking fabulous, but about inner confidence and how you carry yourself. I’ve been to auditions where I’ve been up against 80-year-olds who look tremendous.

‘There’s definitely a market out there for us wrinkly models, and although I don’t rely on it for a living, I have earned a reasonable amount in the past year.’

Her usual going rate is £250 a day, although she is happy to work for free for students and novice filmmakers.

It’s a view firmly echoed by 71-year-old Usha Hands, from Nottingham, whose stunning looks have continued to flower, courtesy of her exotic parentage — her father was from Kashmir and her mother from Vienna.

At 5ft 6in and a neat size 8-10, she has also been working two or three days a week after a photographer friend submitted her photograph to a leading London agency.

‘When he showed them to a model agency they phoned and said they were sure they could get me work,’ she recalls. ‘I was terribly surprised and not really convinced, but decided I had nothing to lose.’

She got her first assignment almost immediately, an infomercial for a high-end property company. ‘I was the oldest person there, but it didn’t matter,’ she says. ‘You’re there to do a job. I’m now on my own after my husband passed away 18 months ago, and in some ways modelling has kept me going.’

Usha was a model in London in the Sixties, but after having her daughter Catherine, now 38, believed her career was long over. Now, however the assignments keep rolling in. ‘I’ve been working pretty constantly from 2004 onwards,’ she says. Commercial work, shopping channels, some catwalks for local designers.

‘I do a lot of skin products and hair shows. I’ve got good hair — the joke is that I’m something of a silver fox. Even so, I do think it’s been extraordinary I’ve kept going.’

Yet despite this powerful silver pound,  more than 90 per cent of all marketing and advertising in the UK is dedicated to the under 50s. In a survey, 86 per cent of over-50s said most online advertising is irrelevant to them. Beyond a certain age, it seems, millions of people all but cease to exist as far as the media and marketing companies are concerned.

Until now, perhaps. As Elaine Dugas, booker at leading European model agency Models 1 points out, many of her contemporaries are realising the potent power of the older model.

‘There’s a market for older models that wasn’t there 15 years ago and it’s getting bigger, and I think the reason is largely economic,’ she says. ‘There’s a generation of older women with great buying power who don’t want to be in blue rinses and long skirts and they want to see women who inspire them.’

Elaine is Daphne Selfe’s booker and says that while it is rare for someone in their 80s to get a designer campaign, there is a ‘trickle-down’ effect. ‘It sends a message,’ she says. ‘It  would probably have been unthinkable a few years ago, now it’s saying you’ve got something to offer.’
And it’s something unique.

In About Face: Supermodels Then And Now, a new documentary tracing the careers of some of the best-known ‘Supers’, David Bonnouvrier, whose agency DNA Models represents, among others, Linda Evangelista, 47, Kirsten McMenamy and Stella Tennant, 41, thinks many photographers appreciate the fact older models have a story to tell. ‘They are irreplaceable, they were years in the making,’ he says.

Sue Scadding, a 58-year-old, 5ft 7in icy blonde from Buckhurst Hill, Essex, likes that idea. As with Usha, she did some modelling as a twentysomething in the Seventies after leaving art school.

‘Back then you were taught you had a sell-by date,’ she says. ‘When I was 24 my booker would say “pretend you’re younger if anyone asks”, because 24 was seen as old in our industry.’

In fact Sue, who has never married, managed to carry on working into her 30s. ‘Something would come along, whether it was the odd bit of advertising or a bit of television work,’ she says.

By her 40s however, work was thin on the ground, despite her striking good looks. ‘I ended up in sales jobs to make ends meet,’ she recalls.

But all that has changed since she turned 50. ‘Shows like This Morning started to use older models to show off their fashion, as they realised the viewer could relate to them,’ she says. ‘Then that filtered into other areas, too — magazines, television commercials — I was recruited to do a television commercial for Shell.’ Sue’s thick blonde hair means she is consistently in demand to model hair products, particularly on shopping channels. ‘They used to use younger models, but there has been a move away from that, into using women from lots of different backgrounds,’ she says.

‘I recently did a fashion show at the Savoy hotel. Afterwards a few of the women in the audience came and thanked me for being there because it meant that they no longer felt invisible.’

Little wonder, then, that none of these rather inspiring but modest women has any intention of giving up their newfound — or rediscovered — careers for now.

‘Part of me thinks ‘‘how long can this go on for?’’ but I’ll keep going until no one wants to use me any more,’ says Sue. Annabel and Usha both feel the same way. ‘Sometimes I think “honestly, the phone must stop ringing at some point”, but then I look at Honor Blackman, who’s 87 and still beautiful,’ says Usha. ‘She’s my guiding light.’

Just as they, in turn, are guiding lights for millions of others.