On a Friday night it’s more common to be sipping a vodka cocktail than to be applying one to your hair.

But last week, when one of the Real Housewives of New York, Kelly Killoren Bensimon experienced a bad hair day, she was not afraid of experimenting to get it back to it’s former glory.

She explained: ‘It’s Friday night. And  instead of having a fun cocktail, I’m going to make you a hair cocktail.

‘I have just finished filming and my hair is so fried.

‘So I called my best-friend Kathlyn Flyyn-Hui who works at AKA salon and said I need some help and I want to do something at home.

‘She told me the best remedy is olive oil, salt, vodka and lemon juice.’

Having gathered the ingredients together in her bathroom,she quips: ‘I’m a new mixologist, I’m a hair mixologist.’

Leaning over her mixing bowl she applies the concoction laughing: ‘I’m doing this for you guys, we all have hair trauma. We’re all in this together!’

The joys of alcohol are nothing new to the Real Housewives franchise.

The Housewives are rarely seen without a glass of wine in their hands – the contents of which has been known to fly and land on many a head of highlights during some of the more colourful moments.

And several of The Real Housewives have been keen to cash in on their association with drinking.

And former Real Housewives of DC, Michaele Salahi, notorious for allegedly crashing a White House reception in 2009, owned and ran a Virginia winery.

But for Ms Bensimmon, the benefits of the vodka combination are not commercial but cosmetic: ‘The olive oil is to make my hair more supple,’ she explains. 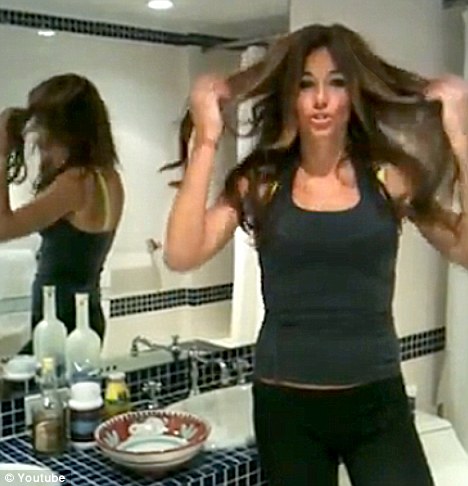 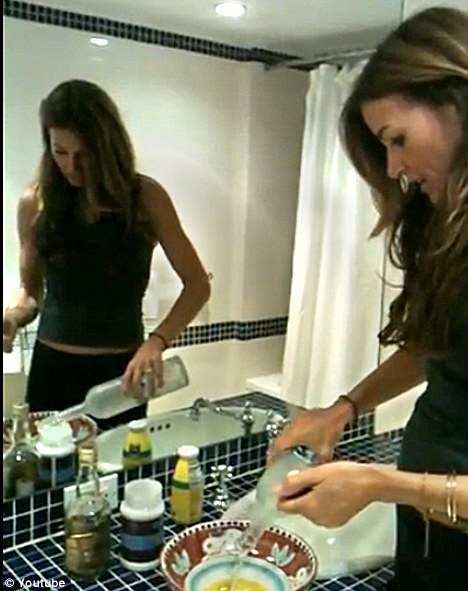 Anything for her hair: Ms Bensimon adds the Grey Goose to her mask mix 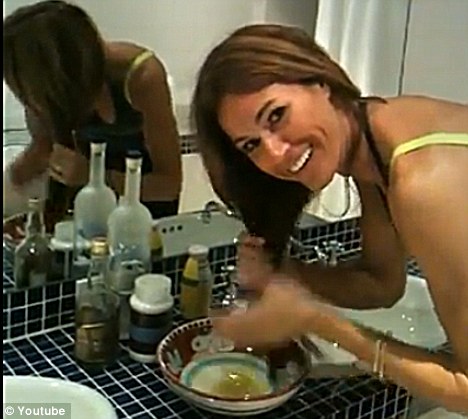 Friday night cocktails: The former model applies the mixture to her hair

‘The salt is going to take the residue off and the vodka and the lemon juice are going to give me that beachy look again.

‘I’m hair obsessed as you know,’ she told her viewers.

Vodka has used as a beauty tool in Eastern Europe for centuries to lighten hair in the sunshine whilst repelling insects – a problem associated with using lemon juice for the same purpose.

But as for the results of the vodka, olive oil, salt and lemon juice combo? Ms Bensimon is yet to upload a ‘reveal’ video of the outcome.

Which puts into question the success of her experiment.  But if it does work, expect a product launch soon.