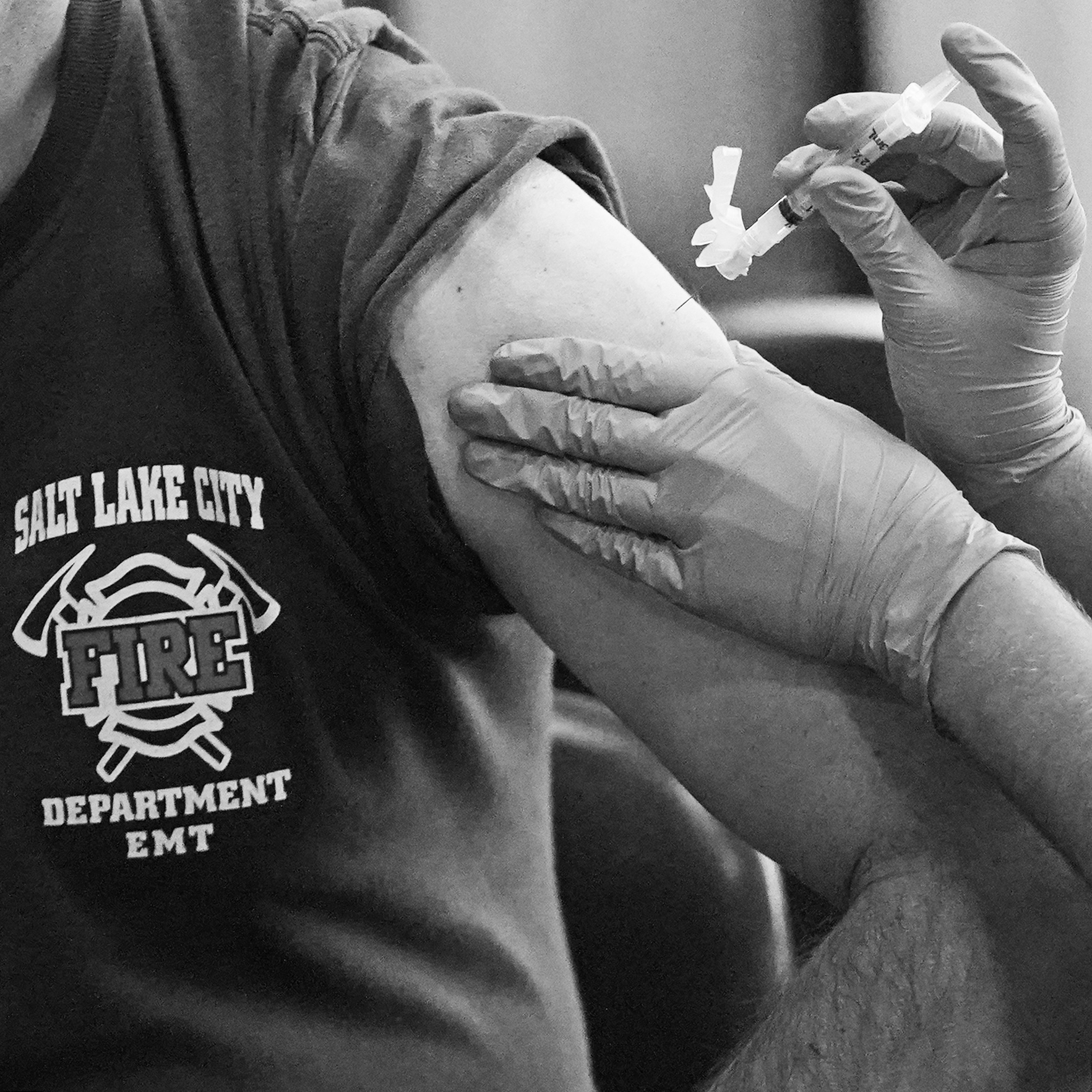 Kentucky firefighter Jimmy Adams saw the ravages of the coronavirus pandemic when he served as a medic who helped care for the sick on medical calls amid surging Covid cases. He knew retired firefighters who died of complications from Covid-19. But he reasoned that they were older and likely had underlying health issues, making them susceptible to the virus.

“That’s how you make peace with those things,” said Adams, 51, a lieutenant. He believed the precautions his department was taking kept him safe. But he refused to get a Covid vaccine. The reason wasn’t strictly political, he said. He had grown weary of the debate around masks, mitigation, caseloads and vaccines.

In mid-August, both Adams and his wife, Sara, who was fully vaccinated, tested positive for Covid. She experienced mild symptoms, however he was hospitalized with bilateral interstitial pneumonia. His potassium spiked, causing cardiac arrhythmia. He was on oxygen throughout his hospitalization.

“I was wrong,” said Adams, several days after leaving the hospital. “I suffered a lot. I don’t even know at this point in the game if I am going to suffer any long-term effects. Does this change who I am for the rest of my life? I don’t know the answer to that. I will be sad if it does.”

Adams now plans to get vaccinated as soon as his doctor allows it, post-recovery. Still, he, like many firefighters nationwide, does not support mandates for Covid vaccines.

For full coverage of the coronavirus pandemic

Firefighters, who more often than not are certified emergency medical providers, have been on the pandemic’s front lines since the beginning. Officials pushed to ensure they would be among the first to receive the vaccines, given their role in the medical system. Yet why, after having seen so much, do so many who are trained to save lives still refuse to get vaccinated — while actively fighting against mandates?

We are pro-vaccine, we are pro-public safety, but we’re just anti-mandate. The fact is you can be all three things at the exact same time.

JT Sullivan, a firefighter in Wyandotte County, Kansas, said that while he took precautions not to bring home the coronavirus when his wife was pregnant, he believed the pandemic was largely “vamped up” by the media — even as he saw its effects in his professional life. He understood something was happening, he just didn’t believe it was quite as bad as was being reported. He believed it affected mostly the elderly and medically fragile. The 28-year-old had no plans to get vaccinated until a paramedic at his department died from Covid complications on Jan. 1. Sullivan got vaccinated soon after.

“It just caught me off guard because he was younger than my folks,” said Sullivan, who encourages vaccinations but also disagrees with mandates.

Several firefighters said first responders reluctant to get vaccinated reflect the range of views held by many average Americans: Some view both the pandemic and vaccine through a political lens, some believe misinformation and conspiracies, some are generally wary of vaccines, and others don’t like being told what to do. Both Adams and Sullivan attributed some vaccine resistance to having a “Type A” personality and harboring a belief that they can exert control over what happens to them.

Houston Fire Chief Samuel Peña, frustrated with his own department’s vaccination rate that he guesses to be about 50 percent, suspects there is some truth to that.

“Through the course of a first responder’s career — whether you’re a firefighter, police officer, EMT — you kind of get a higher tolerance for acceptable risk because you respond to all kinds of stuff that puts your life in dangerous situations and the majority of the time you come out unscathed,” he said. “The level of acceptable risk that we’re willing to take is at a different threshold than a normal, reasonable individual.”

A Los Angeles City Fire Department captain is under investigation after posting a video denouncing the “tyranny” of an expected vaccine mandate there. The city of San Francisco’s Department of Human Resources has recommended 10-day unpaid suspensions for 20 employees, including seven firefighters, for noncompliance with that city’s mandate, according to the San Francisco Chronicle. News reports in multiple cities quote employees questioning the legality of such mandates.

“It’s not true that ‘This is America and we have 100 percent freedom.’ We have a million laws and regulations you have to comply with,” she said, citing, among them, traffic laws and employer dress codes. “That’s what it means to be in a civilized society. That’s what’s called the ‘social contract.’”

Allyson Hinzman, a firefighter and the president of Tacoma Firefighters Local 31 in Washington, said local unions are opposed to Democratic Gov. Jay Inslee’s vaccine mandate. Hinzman said it was rushed and doesn’t allow for alternatives, such as weekly Covid testing. State workers filed a lawsuit this month against the governor over the mandate.

Firefighters are threatening to quit rather than comply, which Hinzman said would further strain short-staffed departments providing emergency services.

She said firefighters take precautions to prevent virus transmission when responding to calls. A University of Washington study indicates the risk of spreading the virus between first responders and patients is low, because of safety protocols followed in the field.

“This isn’t about the vaccine,” said Hinzman, who did get vaccinated. “This is about providing our members the opportunity to choose and make decisions for themselves. We are pro-vaccine, we are pro-public safety, but we’re just anti-mandate. The fact is you can be all three things at the exact same time.”

Bob McDonald, executive director of the Denver Department of Public Health, sees it differently and said vaccines are the only way to move from a Covid pandemic to a health concern that, like influenza, can be managed. Denver has implemented a vaccine mandate for all city employees, including firefighters.

“One of the things that I think is very, very important is to get people to understand that these vaccines, especially with the delta variant, are no longer just about the individual,” said McDonald, adding that hospitals around Denver are at or beyond capacity due to surging Covid cases. It is everyone’s responsibility to mitigate their risk to reduce strain on the nation’s medical system, he said.

Peña said public servants owe it to taxpayers to get vaccinated given that taxpayers ultimately pay the bills for their workers’ compensation payouts or hospitalizations.

Even if employees quit in the event of a vaccine mandate in Houston, Peña said, his department has operated throughout the pandemic with reduced staffing because of members quarantining due to exposure or isolating because of illness. Four Houston firefighters have died from Covid.

“I have been doing this for 27 years, and I can tell you that I have never buried a firefighter for a line-of-duty death because of the flu,” said Peña, adding that if the deaths had been from other duty-related activities, the union would push for action. “Just because this is a medical issue does not mean that we should not be looking for how to better protect our firefighters. The vaccine is one way we can achieve that.”

According to the National Fallen Firefighters Foundation, which honors and recognizes firefighters who die in the line of duty, 170 firefighters and 78 EMS workers have died of Covid complications as of Sept. 17.