‘I use Just For Men hair dye on my eyebrows’: Dita Von Teese reveals her DIY beauty routine

She’s known for her flawless Forties style as much as her racy burlesque performances. Now, in a new interview, Dita Von Teese has revealed the details of her surprisingly DIY beauty routine.

Instead of relying on expensive beauticians, the 38-year-old admitted that she dyes her naturally blonde brows with a men’s home hair dye kit. 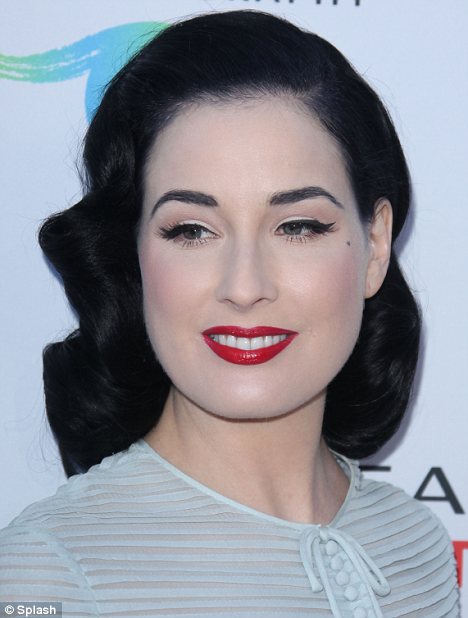 ‘I’m kind of a do-it-yourself person as far as my hair, make-up and styling go… It’s hard work. But nothing good comes easy.’

Ms Von Teese revealed how she applies her signature winged eyeliner and her red lipstick of choice.

She explained that perfect eye make-up takes practice and sometimes even she gets rusty.

‘When I go a while without putting it on, it’s always rough at first,’ she said. ‘But when I’ve been applying it daily, it’s “whooosh;” it goes on seamlessly.

‘Generally, getting that perfect, flattering line is hard! I look down into a mirror to apply it so I can see the shape and match them up better. Make sure not to pull your eyelid out at the side, because when you let go, the line will be a completely different shape.’

She also talked about the reason she opts for a matte finish base rather than the more fashionable dewy look.

The eyes have it: Dita completes her eye make-up with Dior Show mascara

‘Always glowing is not my thing,’ she said. ‘A matte finish diffuses any features about my face that I’m not comfortable with, while shine highlights them. It’s like soft-focus magic.’

She also advised readers never to underestimate the cosmetic power of sunglasses – her brands of choice are Dior and Louis Vuitton.

But perfect skin hasn’t come easy for the star, who also spoke about how she visited several doctors in a bit to cure her rosacea.

She revealed: ‘I was told by a big name dermatologist, “this is your life now,” because he couldn’t figure out how to get rid of it. A million creams later, I went to a real skin doctor in Orange County. He prescribed a pill and one lotion, and boom, it was gone.’

Creme de la Mer is her choice of face cream – ‘ it’s pricey, but so worth it’. She told how she applies it when her skin is still damp from cleansing – ‘that way your pores can absorb it while they are still open.’