Is your manicure destroying your nails?

By Claire Coleman for The Mail on Sunday 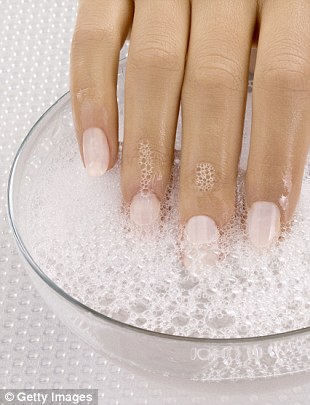 Short term? Women have complained their nails were damaged after Shellac or OPI Axxium treatments

Nail obsessives have been seduced by a new type of manicure that combines the longevity of artificial nails with the convenience of conventional nail polishes.

The result is a glossy manicure that lasts two weeks — perfect if you’re jetting off on holiday. In theory, it doesn’t damage your nails in the same way a ‘false’ gel  or acrylic manicure can.

But recent research from the U.S. suggests this type of treatment, known as a two-week manicure, may leave nails thin, brittle and peeling.

Dermatologists at the University of Miami School of Medicine were prompted to investigate after women complained their nails had been damaged after Shellac or OPI Axxium treatments.

Dermatologist Andrea Chen put the treatments to the test using various instruments to accurately measure the thickness of her own nails before and after a manicure.

The results showed a definite decrease in the thickness after the treatment, though whether it was caused by the manicure or the removal process (the manicure must be soaked off in an acetone solution) remains unclear. Beauty editor Emma Hill is convinced that removing the varnish is the problem.

‘Acetone dries out your nails,’ she says. ‘My nails took four months to recover after I had two manicures back to back.’

Samantha Sweet, a spokeswoman for Shellac, argues that if a trained technician applies and removes the nail polish, then this shouldn’t be a problem.

‘Applying Shellac shouldn’t damage the nail surface,’ she says. ‘The polish has a honeycomb construction, making it porous. The oils penetrate and nourish nails.’

She also says proper removal means acetone soaked cotton wool is placed on the polish and left there just long enough to soften it.  ‘You shouldn’t be saturating the nail with acetone, and you certainly shouldn’t soak the entire hand in a bowl of acetone,’ she says.

So, if you do want a two-week manicure, pick your salon carefully.

‘Definitely use a nail oil afterwards and keep them short,’ says Emma Hill. ‘Use hand cream and massage almond oil into the nail and cuticle daily. This should minimise damage, but there are no guarantees.’