The Gaga effect: Temporary tattoo firm hopes its glossy idea will soon be on everyone’s lips

The idea of tattoos on the lips sounds like a serious style commitment that few would embrace. But one company believes temporary alternatives are set to take off.

Call it the Lady Gaga effect, but with make-up becoming increasingly outlandish, it was only a matter of time before lip transfers were developed. 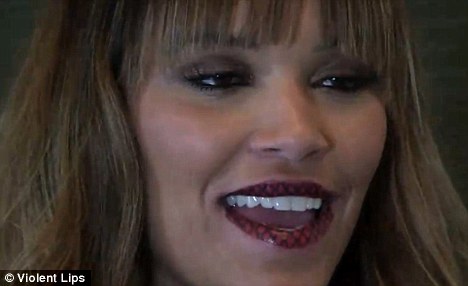 Lip service: The founders of Violent Lips believe that temporary mouth tattoos are set to be the next big fashion trend

The transfers retail in packs of three for $14.95 and last for four to eight hours. Baby oil will remove any residue.

The founder of Violent Lips, music manager Jeff Haddad said the lip tattoos were made out of necessity.

He told today’s WWD: ‘We’ve been paying make-up artists to do this to our artists on shoots.’

Mouth to mouth: There are 12 designs, including cheetah print and polka dots

Lady Gaga effect: Fishnet and gold glitter are also among the bright designs

Although fun for a party – or in some people’s opinion more suitable for Halloween – the tattoos have to be shaped to the wearers lips.

And testers on YouTube have found that they are not as simple to apply as they might appear, despite the final effect being very dramatic.

However when it comes to longevity, the unusual prints do stay put.

Using similar technology to ‘wrap on nail art’, Violent Lips estimate that they will sell one million units by the close of the year.