Underarm overhaul: After all that shaving and spraying, your poor old armpits need pampering

By Marianne Power for MailOnline

As if we didn’t have enough to do fighting crows’ feet, grey hairs and chipped nail polish, it seems that there is a new body part coming under scrutiny: the armpit.

When graduate student Emer O’Toole showed off her hairy underarms on This Morning  — the result of 18 razor-free months trying to change attitudes to female body hair — the nation collectively gasped in shock. She undoubtedly hit a nerve.

Salons are seeing a huge increase in the number of women seeking a bit of TLC for their poor, ignored underarms. 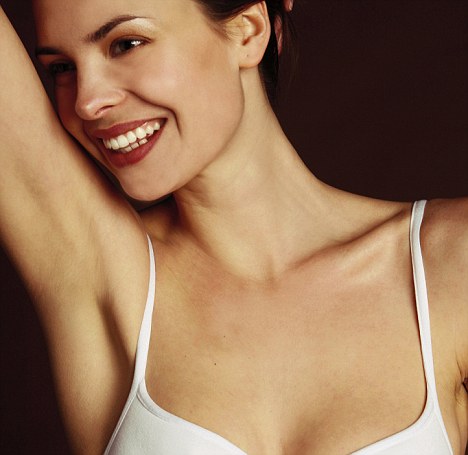 The armpit is the latest body part to come under scrutiny

Irritated underarms are such a common problem that Bliss Spa has launched an armpit treatment called Under-Army, aiming to sort out unsightly skin and ingrowing hairs. Meanwhile, Harvey Nichols’ beauty department reports that Botox injections to prevent sweating are the most asked-about treatment of the year. So how do you keep your underarms from letting you down in your sleeveless top this spring?

Celebrities have long been injecting Botox into their armpits to stop sweating, and some NHS trusts use it as a treatment for hyperhidrosis (excessive sweating). But it’s no longer just for the A-list, or those with a medical need.

Quickly absorbed and a generous size. Lavender and vanilla give a comforting aroma.

This natural balm can be rubbed all over the body to relieve tension.

Great value for money, this lightweight lotion soothed the skin and the senses with fragrant camomile and lavender.

‘We have seen a huge increase in people wanting Botox for their underarms,’ says Dr Preema Vig, director of Beyond Beauty at Harvey Nichols. ‘Women are fed up with sweat patches and this is an effective treatment, which lasts at least six months.’

Botox is injected under the arms where it paralyses the sweat glands; a numbing cream can be applied to the area to stop any pain. It costs about £500 per treatment. ‘Every client I’ve used it on has been delighted with the results,’ says Dr Vig.

Stopping the sweating also prevents the moist, acidic conditions that can cause underarm skin to darken and become irritated. However, it’s not the only option. People who are keen to halt perspiration the natural way might want to try sage — either as a tincture or in tea. This common herb has traditionally been used for centuries to combat sweating.

When it comes to hair removal there are three main options: waxing, laser hair removal or shaving. Shaving is quick and cheap but it can irritate the skin. Venus ProSkin Moisture Rich Razor (£11, Boots), releases hydrating olive and avocado oils to minimise irritation.

Waxing has also become more popular. ‘Traditionally, the underarm wasn’t an area that women waxed, but it’s on the rise,’ says Carly Rayner from Strip waxing salon. ‘People are scared it will hurt, but if you use the right kind of wax — called hot wax — it doesn’t. Cosmetically there is an advantage: because you are pulling out the hair completely, you are not left with the dark shadow that you get with shaving.’ But a word of caution. ‘Do not use strip wax on underarms,’ says Carly, ‘it will irritate.’

Finally, laser therapy or Intense Pulsed Light (IPL) treatments kill hair follicles by firing them with a short burst of light. ‘I swear by it,’ says Dr Vig. ‘I recommend six sessions spaced six weeks apart to start with, then a maintenance session every four months. It dramatically reduces hair growth — and is especially good for dark, brittle hairs.’

Prices vary but six sessions typically cost between £300 and £500.
Be cautious of deals offering cheap treatments — your therapist might not be properly trained. ‘The laser industry was deregulated in 2010, which means that anyone can do it. If you get a poorly trained therapist, you can have issues with burning,’ says Dr Vig.

Once you’ve removed the hair and sorted out the sweat, it’s time to tackle the skin. Years of shaving can cause pigmentation. If this is a concern, you could try White’s Lighten Brighten Correction Fluid (£29, ministryofwaxing.com).

Ingrown hairs can also be an issue. Lotions such as Malin + Goetz Ingrown Hair cream (£26, liberty.co.uk) use glycolic and salicylic acids to exfoliate and soften the skin, which helps the hair pop out. Ordinary face exfoliators also work, but beware of ones with big granules as they could be too abrasive. If you’d like a serious makeover, try Bliss Spa’s Under-Army treatment (£55, blissworld.co.uk) which includes cleansing, removal of ingrown hairs, micro-dermabrasion and a refreshing oxygen blast. Armpits have never had it so good.