Would you pay $300 for a snakeskin manicure? (It could become an expensssive habit)

Snakeskin handbags and shoes have been luxury fashion favourites for years. Now one manicurist believes that snakeskin nails are the next big thing.

Terri Silacci, from Monterey, California, uses discarded skins, which are naturally shed by the animals, with a gel manicure for the unusual treatment.

Customers pay $150-300 for the two-and-a-half hours of nail art, which requires her to cut pieces of snakeskin to perfectly fit each nail. 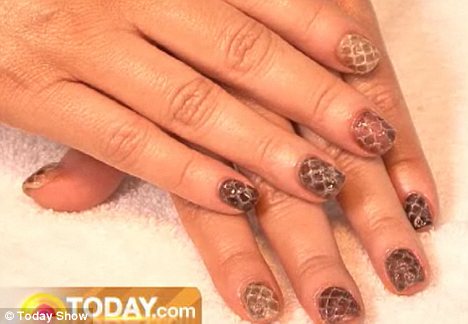 They are sealed in place with a gel varnish, which is then hardened with a UV light.

Ms Silacci says her manicures last up to three weeks, and pedicures up to 12 weeks.

She told the Today show how she was inspired when her son brought a snakeskin home from science class.

She said: ‘One snake’s trash is a toenail’s treasure.

Nail art: Ms Silacci cuts pieces of snakeskin to perfectly fit each individual nail, then seals them in place with a long-lasting gel varnish 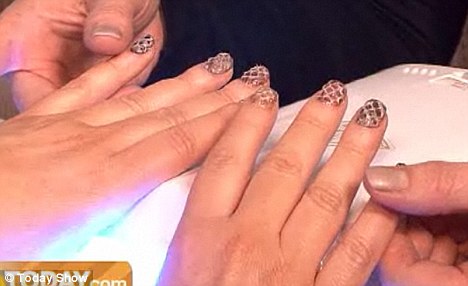 Inspired: The California-based beautician came up with the idea after her son brought a snakeskin home from science class

‘I find that the initial reaction from people is that’s weird, that’s disgusting. And then they say, “I want it. And I want it right away.”

Describing the process, she explained: ‘It takes two-and-a-half hours.

It’s a meticulous process of not only applying the gel as we normally do in an hour to an hour-and-a-half, but we’re also hand-cutting each and every piece of this [snakeskin] to fit each one of your nails. And then sealing it.

Visit msnbc.com for breaking news, world news, and news about the economy