When it comes to ageing, it’s often our hands that betray us.

The tell-tale signs – age-spots, wrinkles and veins – can strike at any time after 40.

But help could be at hand with a new miracle cream that promises to reverse the ageing process by 10 years in just six weeks.

The new Younger Hands cream has been a smash hit selling out on the first day, and now has a waiting list of more than 600. Sales have grown by 220 per cent week on week.

Researchers at makers Australian ‘cosmeceuticals’ brand Skin Doctors have made the extraordinary claim that that £29.95 cream can reduce the depth of wrinkles by half in 28 days. The skin on the back of hands is thin, delicate and is often neglected or exposed to sun damage.

Even celebrities like Sarah Jessica Parker, Nicole Kidman and Madonna, who are known for defying the ageing process with their taut physiques, have been undone by their hands.

He said: ‘The skin on the hands is much thinner than that on the rest of the body and is exposed to harsh winds, UV radiation, cigarette smoke and washing up chemicals, all of which contribute to accelerated ageing’.

‘Our biological ageing process is also a contributory factor and the depletion of oestrogen at the time of the menopause in particular affects collagen production that keep skin on hands plump and fleshy.

Four key ingredients in the new cream are supposed to improve cell renewal process of the skin, reduce redness, creping and roughness, reduce pigment, exfoliate and plump, among other bold claims. 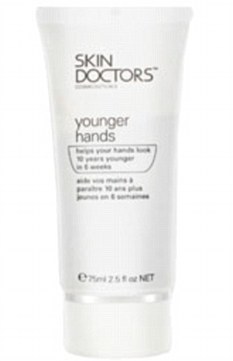 Researchers at Skin Doctors have made the extraordinary claim that that £29.95 cream can reduce the depth of wrinkles by half in 28 days

The clinical strength active ingredients include Line Factor 10 which improves the cell renewal process of the skin for increased  firmness, improved texture and reduced creping.

Uniprosyn PS 18 is a bioactive complex that reduces skin roughness and reduces the appearance of wrinkle depth in aged skin.

Phyllanthus Emblica (Indian Gooseberry), a plant native to tropical Southeast Asia, acts as a pigment-reducing and skin lightening agent to give the skin an even colour.

It also increases the water holding ability of the skin, which reduces the appearance of fine lines and wrinkles.

Alice Hart-Davis, beauty expert and creator of www.goodthingsbeauty.com, said that in theory the cream could help.

‘But our hands are just as exposed to the elements as our faces and so when it comes to ageing, the wrinkles and age-spots on our hands are an even bigger giveaway of our age than our faces.

‘This is serious anti-ageing for hands. Any moisturiser will help plump up the skin on the backs of your hands and help them look less dry, lined and wrinkled, but this product goes way beyond that, with the sort of ingredients like Alpha Hydroxy Acids — which exfoliate the skin and help it to retain moisture — that you find in sophisticated facial skincare.’